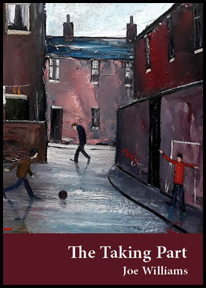 I can’t imagine there are many poets who find (or have found) themselves the first name on a teamsheet, but there are plenty interested in sport. Joe Williams has written a collection about some of the world’s greatest sporting people, but also some of the lesser known or even completely unknown participants. And it’s these folks that are the more interesting, for me — the amateurs for whom it really is all about either the taking part or the rituals around sport.

A key example of such rituals is in ‘Reasons Why Your Team Lost’. What could the reasons be? ‘Did you drink your morning coffee / from the cracked mug? / Did you eat two shredded wheat?’ The poem continues asking these important questions until it gets to the highpoint: ‘Are you — and this is the most important — / wearing your lucky pants?’

The importance of taking part is, for me, best represented by the final stanza in the last part of ‘Ten Pin Trilogy’. In ‘III. Swing, Bend, Release’, the poet covers the pain of injuries received in the line of duty to one’s chosen sport, before subtly summing up why we keep coming back in the face of the usual defeat. Winning is a drug we can’t give up:

As sports injuries go,
there are more impressive
than being hobbled for three days
by twenty frames of swing, bend, release.

But I won that first game,
I remind myself, as I
limp down the stairs,
wincing with every step,
inching closer to the ground.

However, the poem that resonated with me most is the one that probably shouldn’t. Why? Because ‘Results’ is essentially just a list of matches and scores. But it’s what’s behind each set of information that hits home. Each stanza covers a different football-related disaster, starting from the collapsed stand that killed twenty-five at Ibrox when Scotland were playing England and then travelling through time up to the dreadful events at Hillsborough in 1989:

The Taking Part isn’t a misty-eyed, jumpers-for-goalposts look at sport. It covers more ground than that. And, at the end of the day, the lad’s done good.