Yes But What Is This? What Exactly? Ian McMillan 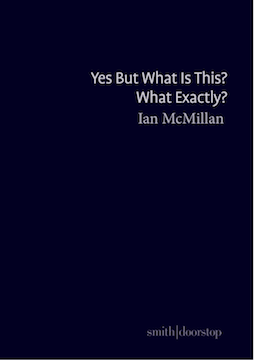 Some poems beckon you in; some call to you sweetly from a distance; and some take you by the scruff of the neck and yank you inside — you’re in stanza three before you know it. Ian McMillan is past master of the third kind.

‘The Fallen Christmas Tree at the Museum’ is a case in point. Here’s the first line:

I know you already know Ian McMillan makes people smile. But he does more than that. The entertainment’s a way of engaging you. Soon you’ll be thinking — hard — about something serious.

‘Three Flat Caps at the Bottom of the Stairs’, for example, is a sort of elegy for the mining industry, an elegy of the stark, unsentimental variety. You can tell that from line one, the one that yanks you in:

The mining industry, eh? What a bastard.

Part of the trick is to address you, the reader, directly. You’re in an ongoing conversation before you can say bob's your uncle. But it’s not all fun and games. Sometimes it’s deadly serious and the serious game is football. ‘Lighter’ deals with a racist incident on the pitch, reported in the Guardian in December 2019, and captured on Sky TV. Here’s how it starts:

You see, Sky catches everything. Everything.

‘Lighter’ is a dark poem. And so, ironically, is ‘Lighthouses’. I’ll quote more from this one to demonstrate that McMillan isn’t a one-trick pony. He’s kaleidoscopic, witty, intelligent, playful and thought-provoking. A Grand-National contender, in fact:

That’s what he said in the interview:

‘Let them live in lighthouses. After all
We have no use for lighthouses any more
So rather than having them litter the coast

Let the homeless live in them,

They have had a bright idea.’