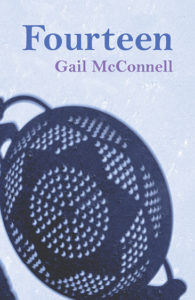 Sometimes one letter stands out in a book, for me. In this collection, that letter is ‘O’. Of course, then, once I start looking, those ‘o’s are everywhere. The title of my OPOI comes from ‘Imprint, O Lord, thy word’:

And there is that ‘O’ in this group, the o of hope. There’s a wish for a pregnancy, that single starting o: a cell. This, from a poem called ‘0’ (zero):

Different poets, and different collections, employ their own architecture. There’s something about the letter ‘o’ – both as sound, and as shape on the page. Apart from anything else it’s a closed circle. It’s a cell, a cry, a fall: o, o o, o oooo….

There’s a poem in Fourteen where every line ends ‘out’ — about a difficult birth (I think, the poet’s). There’s a lovely recurring ‘colander’ in ‘Twenty   Three   Fifteen’, which I picture with its ‘o’s in. And that poem also has this:

orange
or oracle
or ordinary
or orbicular [.... the list continues]

There are two poems called ‘Octopus’, separated in the book, which make an interesting pair. One is about closing the circle — a desperate enclosure. ‘With no internal shell you keep / yourself together in a sac’ it starts. The creature struggles ‘to draw a body not / your own into your care, or spread / out into theirs.’ It’s sad, though the second ‘Octopus’ may be even sadder — where that circle’s broken, and ‘Coppered blood’ fills the water.

Fourteen is a strong, visceral collection, making connections between body and emotions, hopes and worms, octopuses, the cosmos and ‘Mobile’ phone calls — again, chronicling a dance of connection: ‘0 // I text / you text me / back we go / round & round’.