A Boat of Many Colours, A Wayleave Anthology 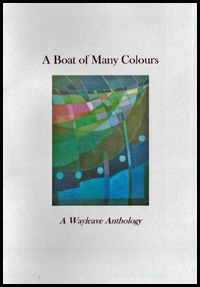 There are seventeen poems in this pamphlet, by seventeen different writers: prime number, prime poems. You would expect nothing less from a publisher’s sampler: Mike Barlow’s Wayleave Press in this instance.

I particularly enjoyed the satisfyingly circular nature of some of the work and the important role played by titles, or the epigraphs below them.

Michael Bartholomew-Biggs starts a disturbing poem with a woman working in the kitchen.  ‘She sets the kettle on the hob […] oddly troubled’ by the noise it makes. She’s thinking about her husband, and the poem concludes:

His death certificate was terse:
all agonies condensed to three cold words
scrawled across one narrow column.

How well-chosen, the word ‘cold’. The three words were the poem’s title, ‘Died from scalds’.

Jane Routh tells the tale of Sir John Richardson in a wonderfully controlled single-sentence, eponymous poem of thirty lines. The skill with which she leads the reader effortlessly through that sentence, divided into its three-line stanzas, is a source of great pleasure. As is the story of this nineteenth-century adventurer and philanthropist’s astonishingly courageous life. What Routh focuses on and rails against, however, is the fact (given in the epigraph) that on his memorial he is referred to only as someone else’s ‘constant companion’. ‘Oh, the gods surely rolled their eyes at that…’

My favourite is an even more intricately circular piece, ‘The emissaries’ by William Gilson. It ends:

And I, a man of 62,
reading, putting down the book.
Going back somehow by a route
no one, not even I, might precisely trace,
to a basement where a boy
crouches in the semi-dark, watching,
waiting for the spiders to move.

The book is The Iliad, and the poem that Gilson has written is beautiful, mysterious, and deeply satisfying. I will be returning to it regularly.

Which will, of course, get me dipping again into all the other offerings in this fine volume. (Did I mention ‘The recovery room’ by Elizabeth Burns? Or Chris Considine’s ‘Pig-sitting on the island?)