In The Particular, Martin Potter 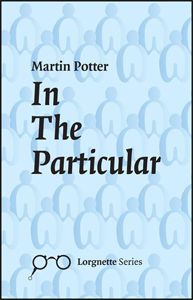 The blurb of In The Particular describes the pamphlet as ‘a collection of quests, in words, for the transcendent.’ Certainly, this is ambitious subject matter.

Potter’s reflections are focused on movement. The first poem, ‘Vespering’, has a pulsing feel. The opening is metronomic, with each couplet overlapping into the next:

Aslant the clerestory setting beams:
Through the sacred shaping glass descend
But miss the congregated heads and spot
The pillar's stems midway and moving light

The context is Christian, but the poem’s movement strikes me as more reminiscent of Buddhist mindfulness. The theme is indistinct, though the language is verbose; it appears that Potter is more focused on cadence than clarity. As in techniques of mindfulness, the poem solicits the reader to observe an unbroken flow of thoughts, rather than their content.

Quickly, however, Potter switches to sensuous and fluid language. He absorbs the reader with the rich and fluent description of ‘a darker space’ in the centre of a town ‘laden with frankincense / And gold’, in which worship flourishes. This portrayal of an exotic landscape, and the way faith finds solace in it, illustrates how transcendence can be secured through adaptation. Convention, this poem suggests, must make compromises with difference and diversity.

Potter’s conclusions are elusive, and a close analysis of this pamphlet may not provide many answers. In the Particular is at its best, it seems to me, when the poet deploys metre and rhythm creatively to illustrate the processes under discussion. He uses reiteration and modulation in equal measure to demonstrate that transcendence is not rooted in context, so much as movement.

In ‘Ark of Recollection,’ Potter worries about the futility of ‘grasping for fixed points on infinite lines.’ The collection’s close focus on rhythm and flow means it does not fall into this trap.