Against the Light – Stewart Conn 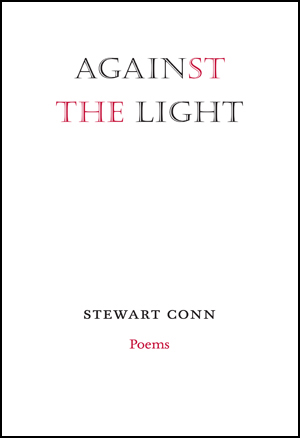 Stewart Conn is a man of many clauses. His sentences pace themselves variously, and often at length, across commas and line breaks. Often I want to stop them, because individual word groups are so delicious that I want more time to savour them, roll them around in my mouth and experience them as savoured objects. Or something like that. It’s hard to explain. Sometimes it’s something to do with the alliteration. Or it’s the rhythm and sound combined. Maybe it’s a kind of aural comfort blanket.

In ‘Ice-Cool’, the second poem in this collection, it was the phrase ‘creamy replenishment’ that stopped me. I just wanted to say it over and over, to taste it, to roll it round my tongue. ‘Replenishment’ is such a lovely word (he is describing an old fashioned delivery of milk in clinking bottles’).  But later in the same poem the sound intensifies into ‘insinuating tinntinnabulations’, and finally, there’s ‘an acrobat cavorting on a crystalline set / of fine-tuned milk-bottles’. How I love ‘cavorting’!

So what fascinates me most here is more the mellifluousness (does that word exist?), the mellifluidity, the mellophones, the mouth-meltingness of certain word groups: ‘a paper hoop, a zero / of whiteness, a blank ice-floe’ (in ‘The Camera Obscura Speaks’). Or ‘a trellis-work of trails criss-crossing the steps / and glistening on the stonework’ (in ‘Slugs’).

The pleasure of reading and re-reading pleasurable phrases is vastly underrated. I’m still on the last line of ‘Milky Way’, lingering on ‘a misty foghorn’s melancholy moan’.