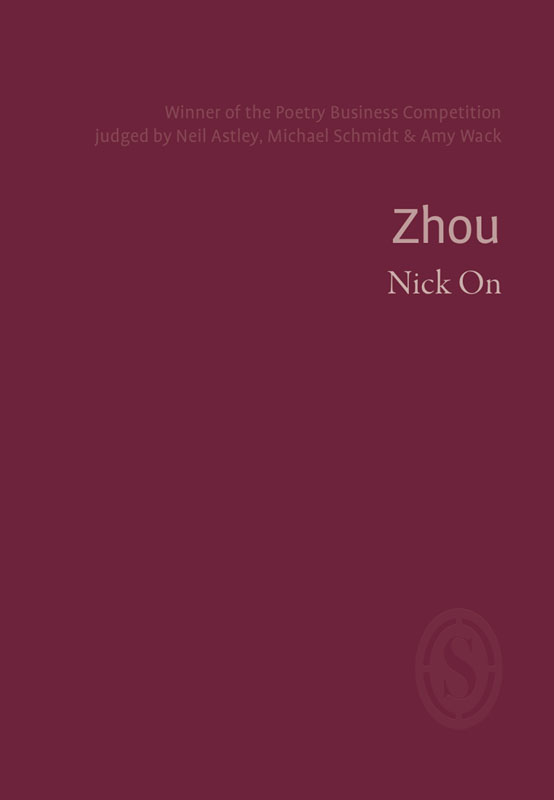 In traditional Chinese medicine, the stomach’s health is read on the surface of the tongue. But what about stomachs removed from their Chinese context? In Zhou, Nick On bypasses the mouth’s tongue, giving a man's ‘untranslated stomach’ a voice in his opening stanzas.

This speaking stomach recurs in themes of consumption and translation, along with all their meanings. On describes the consumption of food as ‘Fiddlehead ferns fried in butter’, of culture as ‘lines from lovely felt-tip pens’, of labour as ‘Human flesh on the market bench.’ The blending of types of consumption is common to many immigrants and their colonial contexts, in which extractive capitalism deprives people of their ancestral sustenance, a loss lamented in song and poetry.

On demonstrates three types of translation: the rewriting of the Chinese name ‘Zhou’ to the English ‘Joe,’ the journey of Zhou/Joe from East to West, and the translation of DNA to RNA — gene expression, also known as inheritance.

That we are copies of our ancestors is implied on the first page, where a photo of a man — blazer, tie, pen ready to strike — is captioned by two names (the dates of birth and death correspond to the grandfather and father in the poems). The poet complicates this concept later with six sonnets titled ‘Ghosts,’ which transform in each iteration with variant line breaks and lengths, like mutating chromosomes.

One poem doesn’t concern Zhou/Joe or his descendants. ‘Dr. Wellington Koo’ snapshots the statesman who, between stints as China’s acting premier and UN judge at The Hague, served as ambassador to the UK. At a banquet, an Englishwoman asks, ‘You like-y soup-y?’. It is only after Koo delivers a speech ‘in perfect English’ that the reader turns the page and sees an alternative, wished-for reality, which I’ll call esprit de papier: Koo replying, ‘You like-y speech-y?’ In this playful and painful poem, On captures the conundrum of even the most privileged immigrant: that while trying to consume what he needs to survive, the immigrant remains an object of consumption, his body a text which others read and translate.