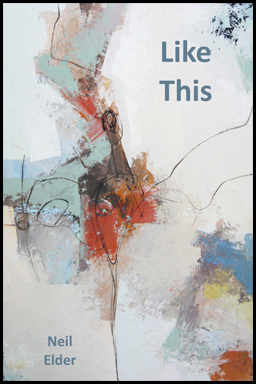 Poetry of the everyday

Not much happens in Neil Elder’s pamphlet, with one obvious exception which will hit fans of The Blue Planet more than most. Apart from that, the poet goes for a walk, drives to work, notices a girl in a train, goes to the supermarket, watches TV.

What interested me was the originality with which Elder delves beneath the surface of these mundane events to disturb and enrich the initial perspective. A walk in the country becomes a musing on the tension between engagement and disengagement. A visit to the supermarket becomes an act of remembrance of a dead father. Indecision over paint colour is contrasted with the certainties children expect from their parents.

This focus on detail is exemplified in ‘Four Minutes in May 2020’:

That strip of light has shifted; shrunk.
It will not much last longer.

The poet records these events in appropriately simple language with some memorable flourishes. In ‘No cure’, the parting shot, ‘There is no cure for the end of summer’ stayed with me as did this from ‘Journeyman’:

places that only exist when
you lurch across lanes to
reach them.

This image of a romantic quest as a desperate, and possibly dangerous, driving manoeuvre felt central to the whole set of poems. It’s much easier to keep heading forward with your foot down — but you may miss a lot as a consequence.

The final poem, ‘Magic’, is a brief but poignant elegy to someone who died ‘just a week after building your last snowman’. It is a terrific example of how a short poem can say a great deal.

I like the idea that poetry is uniquely capable of uncovering meaning in everyday life. The pamphlet contains much that will bear this out. In his preface, the author discusses the title of the collection and draws attention to the possible meanings of Like This. Is it an instruction (as in social media), a question or a plea?

For me, social media underpins these poems of the everyday. If I were online, I’d hit the ‘like’ button.